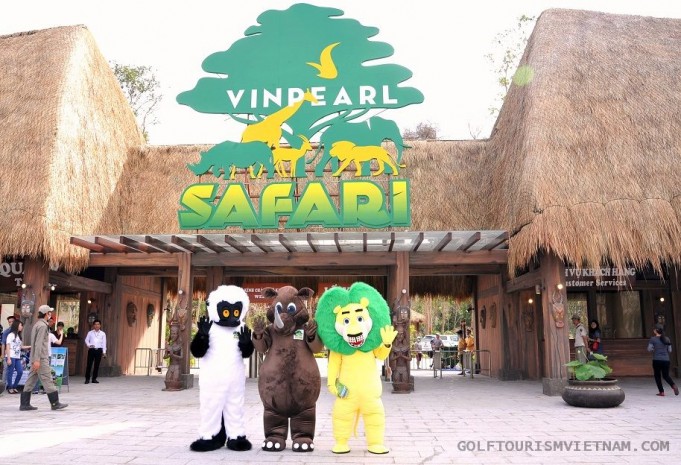 A safari park, sometimes known as a wildlife park, is a zoo-like commercial tourist attraction where visitors can drive in their own vehicles or ride in vehicles provided by the park to observe freely roaming animals. The main attractions are frequently large animals from Sub-Saharan Africa such as giraffes, lions, rhinoceros, elephants, zebras, ostriches and antelope. A safari park is larger than a zoo and smaller than game reserves.

December 24th, 2015 The Vingroup officially opened the wildlife conservation park Vinpearl Safari in Phu Quoc island in the southern province of Kien Giang on Christmas 2015 making it the first wild zoo in Vietnam.

Phu Quoc is the largest island in Vietnam that is located in the Gulf of Thailand, 50km from the Vietnam mainland.

The first phase of the park spans 380 hectares, consisting of two main areas: Open Zoo and Safari Park. It will be the home of more than 3,000 domestic and foreign animals of 150 species, including African zebras, camels, antelopes, Bengali tigers, African lions, and black-and-white ruffed lemurs. More rare animals will be added into the zoo in the near future, including rhinos and giraffes.

Visitors can walk through a forest where they can see hundreds of American flamingos in a big lake, they can also board a bus to go on safari, where they can come face-to-face with such animals as tigers, lions, rhinos and elephants through the windows.

The zoo will have country themed areas including Africa, Brazil, India and Australia initially, alongside animal shows, picture huts, variety of restaurants and a themed visitor areas. There will be a golf cart style train taking tourist to the various sections of the zoo.

The Vinpearl Safari broke ground in September, with an estimated cost of VND 3.3 trillion (US$147.32 million), according to Vingroup.

“Our aim is to make the park a wildlife conservation program in Vietnam, we want to turn the park into the second largest zoo park in the world, creating the best spaces for wildlife animals as well as enhancing public awareness in wildlife conservation and helping develop nature tourism in the locality.” said Dr. Le Khac Quyet, director of the program.

Part of real estate conglomerate Vingroup’s Vinpearl resort complex, the safari is expected to expand during the later stages of the project.