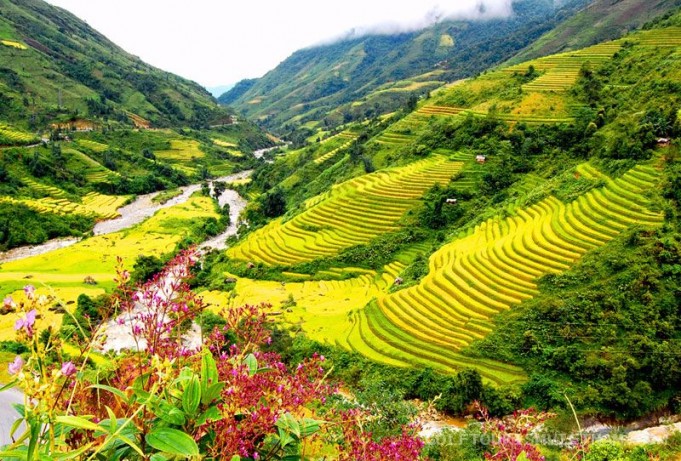 Located at the elevation of 1600 meters (5000 feet) above sea level in Vietnam’s remote Northwest mountainous areas, Sapa which is a lovely hill station town in the Hoang Lien Son mountain range is famous for both its fine, rugged scenery and rich cultural diversity.

Thanks to its geographic condition, Sapa is widely considered one of the Vietnam’s best two places to escape from the heat in summer, the other place is Da Lat – the charming town in the Central Highland, the Sapa’s temperature remains stably cool throughout the year though winter may see more severe changes, with frost and even snow. In the summer, Sapa is a very popular destination for domestic tourists to escape from the crazy heat of Ha Noi.

There’s two ways to get to Sapa- by over night train or bus. The train from Hanoi  to Lao Cai station takes around 8 hours. Due to the newly-opened expressway, travelling to Sapa by bus is easier than ever, it only takes around 4 hours to escape from the heat of Ha Noi in summer to get the cool mountainous area of Sapa.

Sapa and its surrounding region is host to many different hilltribe minorities, as well as rice terraces, lush vegetation. There is nowhere in Vietnam can tourists easily meet the local ethnic minorities like in Sapa.

Sapa is regarded as the best trekking spot in Vietnam, by both natives and foreigners, the whole town is covered by Hoang Lien Son mountain range, which also includes Mt. Fan Si Pan – the highest peak in Indochina with the height of 3143m. This mount is not only a tough challenge to trekking enthusiasts but also an opportunity to witness the splendid mountainous vista.

Reaching the peak of Fansipan Mountain used to mean a full-day hike at least. But from later September, 2015 the trek up will be reduced to a 20-minute flight by cable car.

This will be the world’s longest and highest cable car, no less, running up from sleepy Sa Pa Town in Lao Cai Province to Indochina’s rooftop”, Rough Guides says.

However, as a result of a recent surge in popularity Sapa has rapidly become a tourist hotspot where money is the new drug of choice. Don’t be put off by the rush, your explorations of the surrounding countryside will be worth the trouble. The road is curved around the mountain and you will just go from one surprise to another. The further you go, the closer you are to the sky and to nature. Sapa is definitely a place to remember. And maybe to return as well!

Nguyen Hung Dung And The Dream At The Masters