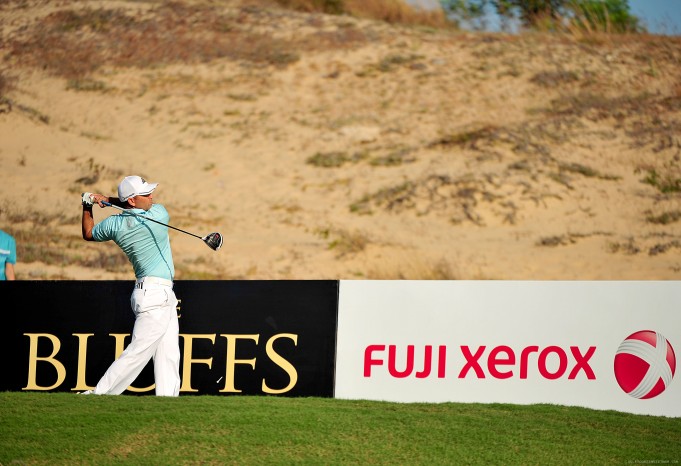 Ho Tram, Vietnam, December 5: Sergio Garcia of Spain and Charlie Wi of Korea joined the title hunt with Lin Wen-tang (Tpe) at the US$1.5 million Ho Tram Open after completing their second rounds on Saturday morning.

On Friday afternoon, the 2nd round was suspended due to the strong wind and darkness, fifty eight players had to return on Saturday, 6.30 am to complete their remaining holes. Overcame the strong wind to finish the 2nd round with a score four-under par 67, Lin Wen-tang led at the Ho Tram Open after two rounds of championship.

World number 12 Sergio Garcia had a score two under par through 12 holes after Friday, he returned to the 13th hole and birdied the closing two holes for a three-under-par 68 to stay in the title hunt.

“I didn’t hit the ball well this morning. I hit a couple of better shots coming in. My first three holes weren’t very good. At least it was a good way to finish the round after three-putting for par on 16. I need to play better this afternoon to be up there.”

Korean golfer – Charlie Wi who had a wonderful first round with a course record 62, was five-over through 13 holes of his second round, but he managed to come back the hunt with one eagle at the fifth hole from 15 feet and two birdies on seven and nine thanks to the calmer morning to finish the 2nd round with score of 72.

“Yesterday was so difficult. I hit it very well from tee to green but it was so difficult to putt. I did a lot of damage yesterday but I was able to come out and take advantage of the course conditions this morning,” said Wi.

The results of other golfers after finishing their 2nd rounds: Himmat Rai (69) of India, reigning Order of Merit winner David Lipsky (70) of the United States, Malaysia’s Nicholas Fung (70) and Thailand’s Thaworn Wiratchant (71) and Chawalit Plaphol (67) shared fourth place on 135, three shots back from the lead.

Scores after round 2 of the Ho Tram Open