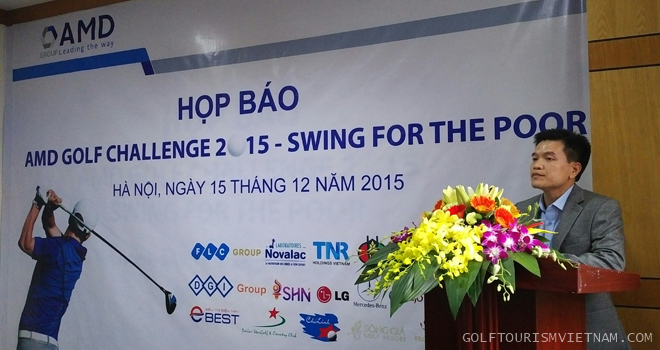 December 15th, 2015, at the press conference, the organizing board of AMD Group officially announced the annual golf charity tournament “AMD Golf Challenge 2015 – Swing For The Poor” with the participation of nearly 300 golfers. The tournament will take place in two days: December 26th, 27th at the first links-styled golf course in the North – FLC Samson Golf Links, Thanh Hoa Province.

The charity tournament will not only be a meeting place for golfers from all clubs throughout the country to exchange experience, show their golf skills and win valuable prizes but also a chance for AMD Group to show gratefulness to their partners, customers who have been working with AMD Group for a long time in the investment , real estate, finance fields.

The tournament’s organizing board will raise funds for the poor in the rural district of Yen Dinh, Thanh Hoa Province. The attending golfers will hope to donate about 100 milion dongs for the poor’s funds.

According to Mr Dao Tien Duong –the Chief of organizing board, there are many golfers who have been playing at the national professional tournaments will play at this year’s event.

The tournaments in 2015 will be played over 18 holes and the scores shall be based on System 36. Participants will be divided into three divisions: A (HDC 0-15), B (HDC 16-29) and C (HDC 29+). The prize up to 20 bilion dongs including Best Gross Prize and First-Second-Third of Each Division, Technique Prizes (Longest Driver, Nearest to the Pin và  Nearest to the Line.) Especially, there will be four chances for golfers to win a 2 biliong dong-Mercedes Benz Car and two 35-year membership cards worth US$70,000 at FLC Sam Son Golf links và FLC Quy Nhon Golf Link. The hole-in-one prizes will be put at the four Par 3 holes.

At the remaining 14 holes, the organizing board will put many hundreds-of-milion dong-prizes for golfers who can get an eagle.

FLC Samson Beach & Golf Resort, covering 450 hectares, is the largest golf course – resort – hotel complex in the central region of Vietnam with total investment of VND5.5 trillion ($260 million). According to Nicklaus Design, FLC Samson Golf Links is a rare position which has the potential to build a unique golf links form, where the interface between seaport and Ma River, near Sam Son beach resorts. The scene here is quite broad, stretching, promising for challenging golfers.

Tiger Phuong – Golfer With Most Holes In One In Vietnam