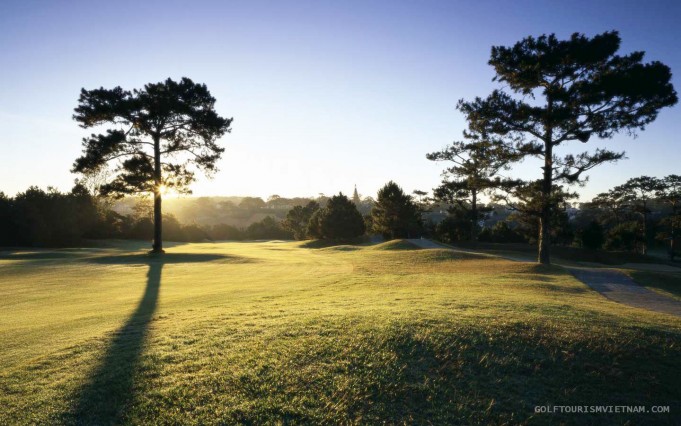 Known as “Home of Golf in Vietnam”, Da Lat Palace Golf Club is the oldest golf club in the S-shaped country. It boasts a colourful history that can be seen and felt throughout each of its 18 inventive holes.

Situated in the Central highland of Vietnam, at the elevation of 1500m above sea level in the temperate climate, Dalat has long been a retreat for royalty and travelers seeking rest and relaxation in the cool mountain air.

In 1893, the European – Dr Alexandre Yersin discovered Dalat. He had a very convincing idea when Paul Doumer, the governor general of French Indochina, looked for a high location to create a resort for white people in Indochina. The city was built in 1912 and quickly became a favourite resting place for Europeans, especially French officials. The French endowed the city with villas and boulevards, at one point during the French colonial period, some 20% of Dalat’s population was foreigners, as evidenced by the 2500-odd chateau-style villas scattered around the city.

On the first city plan made by Architect Mr. E. Hébrard in 1923, a Golf Course was already featured, together with the sport arena opposite the man-made lake (Xuan Huong Lake).

In 1926 Bao Dai became emperor of Nguyen Dynasty, he is also the last Vietnamese emperor. Da Lat was probably the most important location for the Emperor Bao Dai after the Imperial Citadel in Hue. He had several summer houses here, now called Palace I, II and III.

After returning from a trip to France, where he discovered the sport in Normandy and in Paris chic suburb of Senlis-Chantilly. In early 1930’s, he then decided to build his own course in Dalat, as it was marked on the city plan. The course had only 6 holes and a small club house, the one that was underwent a big renovation and you can still enjoy today.

When Emperor Bao Dai abdicated in 1945, the course was abandoned and the fairways and greens were erased by vegetation. Fifteen years later, Dr. Dao Huy Hach, a practicing physician who had begun playing golf in Saigon realized what royal players had known for several decades: the cool climate of Dalat was ideal for playing golf. He asked some sponsors to rebuild the course, one sponsor per hole. The course had only 8 holes with two different tee-box at the hole number #8 as he only found 8 sponsors.

Dr Hach said: “The most difficult part was seeing the greens. We had to use aerial photos from the National Geography Institution”. Using hand mowers to re-sculpt the fairways, the first hole was restored in 1959, full nine were completed in 1965.

The course started to become famous when golfer Billy Casper – one of the most prolific PGA TOUR winners in history coming to cheer the American troops (Billy passed away at the age of 83 in February, 2015). There were about 40 members through the 1960s, most from the embassy staffs and foreign construction companies in the area.

After the Reunification of Vietnam in 1975, the course was left to grow over once again until 1993 when a millionaire named Larry Hillblom, the co-founder of Danao International Holdings Limited (DHL), did a big renovation of the first nine holes once again and then turned the golf course into a full 18-hole golf course which has now become one of the leading courses in the whole of Asia.

Imperial City Of Hue – House Of The Last Dynasty Viet...