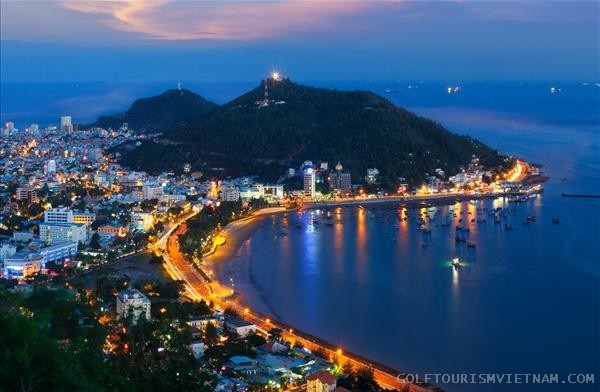 Vung Tau is the tourist and commercial center of Bà Rịa – Vũng Tàu (an industrial province in Southeastern Vietnam). Located at a short distance from Ho Chi Minh City (125kms /77 miles) makes it a popular weekend beach escape destination for nearly 10 milion people in Ho Chi Minh city and other nearby provinces.

Situated at the tip of a small peninsula. It has traditionally been a significant port, particularly during Vietnam’s period of French rule. Today, the beach city plays a significant role in Vietnam’s offshore oil industry as Vung Tau is the only petroleum base of Vietnam.

From the center of Ho Chi Minh City, the most convenient way to travel to Vung Tau is the bus. Due to the newly opened Long Thanh-Dau Giay Expressway, it only takes you 1.5 hours instead of 2.5 hours in the past. Another fast way to get there is by hydrofoil fast ferry. After one hour and 15 minutes, Vung Tau peninsula appears in front of your eyes with its two famous mountains.
Some of the most popular tourist attractions in Vung Tau

Yes, even if you’re a golfer and you don’t want to step your foot on sand. Two of the best golf courses in the South of Vietnam are waiting for you.

The 27-hole Vung Tau Paradise Golf Club is built on a gentle-slope terrain with hollow and deep places that create different steps and levels for sight. Golf course is designed based on the ball direction of the world’s champions and it is reproduced under shape of the golf courses that used to welcome presence of famous persons.

The Bluffs Ho Tram Golf CLub located in an undeveloped beachfront sits at just 1 hour drive from Vung Tau or 2 hour- drive from HCMC. It is the home of the Ho Tram Open – PGA Golf Tournament – Vietnam’s richest golf showpiece from December 3-6, 2015

Set on the coastline, routed over and around towering sand dunes, which have been shaped over thousands of years, the Greg Norman-designed Bluffs Ho Tram Strip was built to capture the true essence of links-style golf

“This is one of only two pieces of land of this quality and character I have ever been given to work with — the other being Doonbeg [Ireland],” Norman said.

Don’t miss these two great golf courses on your next trips to Vung Tau with your family and friends.

Vietnam Honoured As 2016 Golf Destination Of The Year Asia &...

The Cham Islands – A Tourist Place Without Plastic Bags