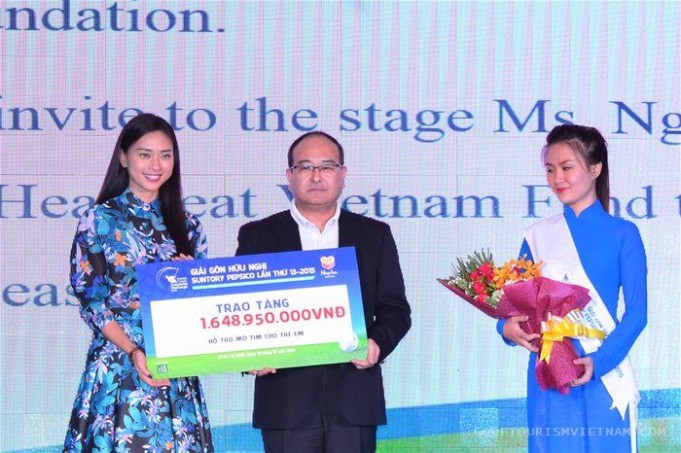 December 16th 2015, the 13th Suntory PepsiCo Friendship Challenge 2015 was successfully taken place at Vietnam Golf & Country Club, the championship raises over 1.6 bilion VND to the Heartbeat Vietnam, a program of the VinaCapital Foundation (VCF), which began in 2006 by saving poor children who needed.

Funds raised will be used to help paying for conducting heart surgeries for about 70 children all around the country who have congenital heart conditions.

“We do hope this annual charity tournament will be a good chance to meet up all strategic partners and to express our corporate social responsibility and give greater support for needy people, then enhance the living standard of every person in the society” addressed Mr. Katsuyasu Kato, Suntory PepsiCo Vietnam.

Since the first year of the Friendship Championship in 2007, the golf tournament have raised VND15 billion to build houses for the disabled, donate scholarships to orphans and have conducted about 430 heart surgeries.

In addition, SPVB has accompanied the Swing for Life, a charity golf tournament as a diamond sponsor in 16 consecutive years. This is one of the biggest and most prestigious charity golf tournaments of its kind in Vietnam that is organized by Saigon Golf Association, Vietnam Golf and Country Club and the Sponsoring Association for Poor Patients. This year’s event raised 1.2 billion to support for the community.

Suntory PepsiCo Vietnam which is 100% owned by foreign capital is a joint beverage venture between PepsiCoInc. (U.S.) and Suntory Holdings Limited (Japan) which was put into operation in April 2013.

VinaCapital Foundation is an international NGO in Vietnam that was established in 2007 as a US-registered 501 (c)(3) not-for-profit, tax-deductible organization. The Foundation’s strength is its ability to implement development and humanitarian projects in Vietnam in a completely transparent manner.

TOPLIST: MOST TOUGHEST GOLF COURSES IN THE WORLD (Part 2)