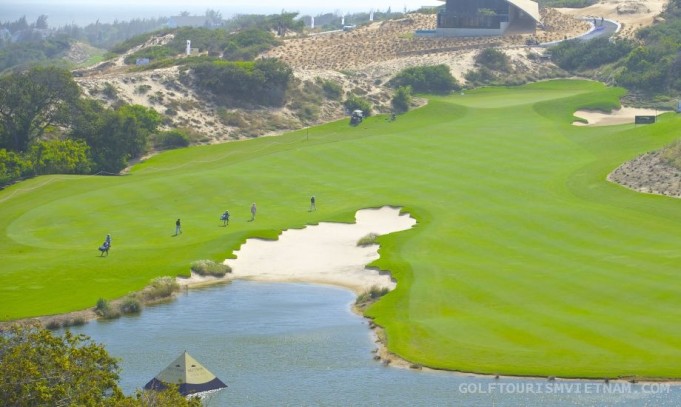 Lin Wen-tang of Chinese Taipei fired a four-under-par 67 in gusty conditions to grab the second round clubhouse lead at the Ho Tram Open on Friday.

Lin, a six-time Asian Tour winner, overcame the strong wind at The Bluffs Ho Tram Strip by shooting six birdies against two bogeys for a two-day aggregate of 10-under-par 132 in the richest full-field Asian Tour event.

Due to the coastal location and lack of trees, the links-styled Greg-Norman course is frequently windy. The playing conditions were perfect in the morning, but in the afternoon the wind started to pick up which reached up to 25mph and moved golf balls on the greens, forced the organizing board to stop the game for two hours.

“This is probably the strongest wind conditions that we play in all year on the Asian Tour. With the course conditions being open and the greens tricky and fast, it wasn’t easy.” David Lipsky said

With play suspended due to darkness, fifty eight players will return on Saturday, 6.30am to complete their remaining holes.

Thaworn Wiratchant (Tha) – who holds the record for most victories, with 18 total wins – Second Round Even par through 13 holes, seven under for tournament in 3rd position.

World number 12 Sergio Garcia, who was two under through 12 holes, lies three back of Lin alongside Thaworn Wiratchant. India’s Himmat Rai shared third place with them after returning a fine 69 for a 135 total.

Overnight leader Charlie Wi of Korea, who had a wonderful first round with a course record 62, didn’t have a great perfomance when he was five over through 13 holes of his second round, falling to four-under-par for the tournament.

Meanwhile, Vietnamese star golfer Michael Tran who had a perfect opening day with score five-under-par 66 lost his advantage when finished the second round with score 5-over par 76 (total 142 of two rounds).

Transtarted his game by 3 continuous bogeys and a double-bogey at hole #4. With the encouragements from the spectators, he gradually improved his shots’ accuracy. However, he still had another bogey at hole #10 and only had 1 birdie at hole #12.

“If I can put myself back in contention tomorrow then it will be good. If I can’t then I will enjoy playing in the tournament and move on to the next.” He said.

What does it take to be the best?