Ho Tram, November 25: Filipino golf star Angelo Que will compete at Ho Tram Open on December 5th with every intention to triumph in the country that launched his career over a decade ago. 11 years ago, at the Carlsberg Masters 2004 – the first official event of the Asian Tour held in Vietnam that took place at Chi Linh Star Golf and Country Club. Filipino Angelo Que produced a stunning upset victory over Thai star Thongchai Jaidee and former US Open champion Corey Pavin.

A win at The Bluffs Ho Tram Strip course – the 2015 World’s Best New Golf Course which is located about a two hour drive from Ho Chi Minh City, will be the best birthday present as Que will celebrate his 37th birthday during the first round of Vietnam’s newest and richest international sporting event.

“My first Asian Tour win came in Vietnam and I needed to win back then to keep my Tour card. Not even a second place would have helped me then. The win at the Carlsberg Masters 2004 kick started my career as a professional golfer and I’m now looking forward to playing in the Ho Tram Open and maybe trying to win it to end my five-year title drought,” said Que.

Chawrasia has enjoyed one of his best seasons to date but wants a win to put the icing on the cake as he has never won outside of India and hopes to make his first at Ho Tram Open 2015.

“I’ve heard a lot of wonderful things about The Bluffs Ho Tram Strip course and I can’t wait to get there for the Ho Tram Open. My year has been good with several top finishes but of course I would like to win a tournament before the year concludes,” said the 37-year-old Chawrasia.

Since opening in October 2014, the links-style 18-hole layout has gained numerous notable titles such as the 2015 World’s Best New Golf Course or  2015 Vietnam’s Best Golf Course… 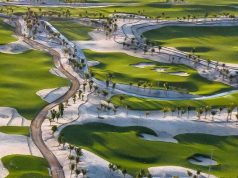